The Qua or Quaverse Remote Access Trojan (QRAT) is a Java-based RAT that can be used to gain complete control over a system. Introduced in 2015, QRAT was marketed as an undetectable Java RAT and is offered under the software-as-a-service model. Just after its original debut, we blogged about QRATs being spammed. As shown in Figure 1, the functionality of the spammed QRATs can be extended through the plugins offered by Quaverse. 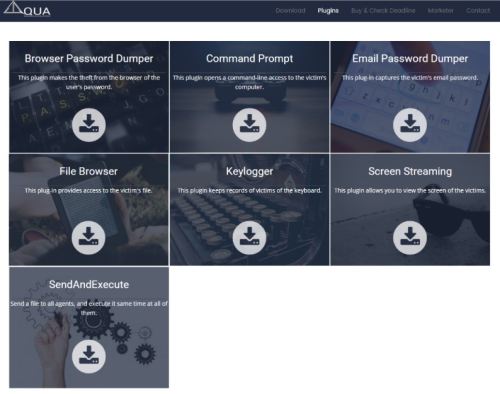 Figure 1: The website of Quaverse, captured from the 2015 blog, offering plugins for QRATs

Recently, we have encountered more spam campaigns that attempt to spread QRATs. The initial malware contains a subscription account for QHub (user:<digits>@qhub-subscription[.]store[.]qua[.]one), a service that offers a single interface to control remote machines. Its domain qua.one contains the same logo as to Quaverse’s website we have seen way back in 2015. 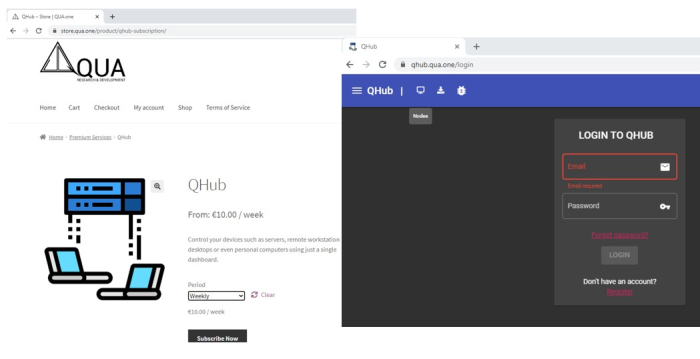 Figure 2: The QHub service is offered as a Premium Service

This spam campaign using QRAT malware has multi-stage downloaders. The first one is a JAR file that may arrive as an email attachment or can be downloaded from a link contained in a spam message. All the JAR files we have collected related to this campaign are obfuscated using the Allatori Obfuscator – the class names all have the same name and length but have different case. 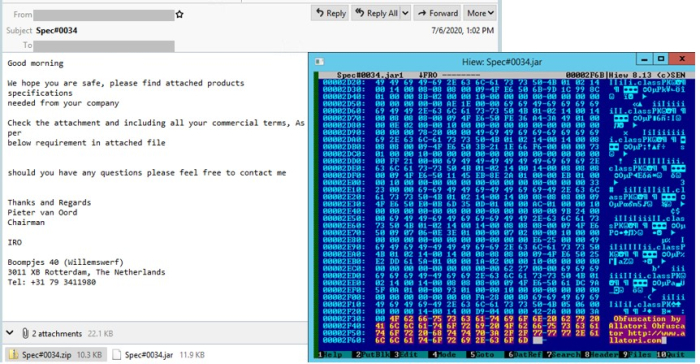 Figure 5: The HTML downloader attached to the malspam has link to the first stage downloader hosted in a cloud service platform

The first downloader has 2 major functions. These are setting up the Node.Js platform onto the system, and then downloading and executing the second-stage downloader.

Figure 6: The code snippet of java.exe’s memory dump when the attachment Spec#0034.jar from Figure 4 was executed

Firstly, upon the execution of the JAR file, the process architecture of the system will be checked, and that information will be used in downloading the appropriate Node.js for the machine. The JAR files we observed downloaded Node.Js version 13.13.0 from https://nodejs.org/dist/v13.13.0/node-v13.13.0-win-<x86|x64>.zip and extracted its content at %userprofile%/qnode-node-v13.13.0-win-<x86|x64>.zip. The JAR files were designed to run in Windows environments only.

Secondly, the JAR file Spec#0034.jar downloaded wizard.js from its command and control servers (C&Cs) then saved it under the qnodejs folder located inside the Node.js installation path. Then, the JAR file executed wizard.js with the C&Cs and the QHub service subscription user as arguments, as shown in Figure 6.

We were able to obtain the file wizard.js, from hxxps://environment[.]theworkpc[.]com/scripts/wizard[.]js, through the JAR file from Figure 5. The file wizard.js is encrypted using Base64. Looking through its decrypted code, this script has its own defined modules.

Figure 7: The code snippet of the downloaded second stage downloader

Figure 8: The modules of wizard.js

The first main function of wizard.js is to set its persistence. The file qnode-<8 hex>.cmd will serve as the autorun file and written in it are the same arguments that the JAR file downloader set on wizard.js (see Figure 6) appended with a “--delegate” command. 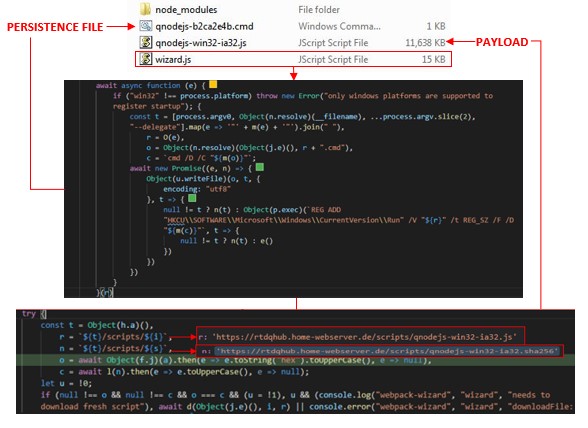 Then, based on the platform and architecture of the system its running on, wizard.js will download the main malware. Using the C&Cs from the JAR file in Figure 4, we were able to download qnodejs-win32-ia32.js on 24-July-2020.

Figure 10: The Node.Js process which executes the payload qnodejs-win32-ia32.js

Just like the downloader wizard.js, the main payload qnode-win32-ia32.js is written in Node.Js, its code is encrypted with Base64, and it has its own written modules. It contains an encrypted Node.Js packages folder node_modules hence its size is almost 12KB.

The Node.Js script uses the string “qnode-service” as the node command name and requires the arguments --central-base-url and --group when executed.

Some of the information, like the machine’s UUID, tags, and labels generated by the malware, will be written in the config file %userprofile%/<hex>-config.json. Meanwhile, the malware will use the service hxxps://wtfismyip[.]com to obtain network information.

Figure 12: The filename of the config and error logs were prepended with the hex representation of the QHub subscription account shown in Figure 6

Figure 13: Code snippet of the data retrieved from the service hxxps://wtfismyip[.]com/json

Figure 14: The applications chrome, firefox, thunderbird, and outlook are supported in this QRAT’s password-recovery functionality

This threat will communicate to its C&Cs through the Websocket connection protocol and below is the list of commands related to the 3 functions of the QRAT qnode-win32-ia32.js file mentioned above. 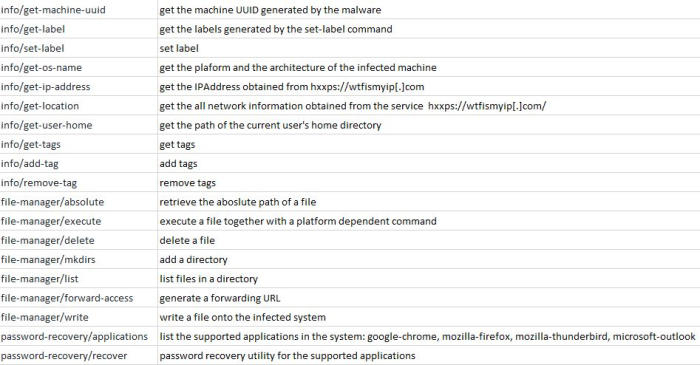 Remote access trojans are one of the commodity malware nowadays. With services like QHub, RATs can be a more attractive instrument to the threat actors as the machines infected by the RATs can be easily monitored in an already available environment they offer. The QRAT and its downloader are currently supporting the windows platform for now. Since they leveraged Node.Js which is a cross-platform, there is a possibility that this threat will be enhanced to support other platforms in the future.

In terms of mitigation, we recommend blocking inbound emails with Java files outright at the email gateway. We have also added protection for this threat to the Trustwave Secure Email Gateway for our customers.