ON24 presenter mode requires you to install a plugin that is used to share your screen. For the macOS app (DesktopScreenShare.app), the plugin is started automatically once a user logs on. If you ever presented using ON24 platform, you’ll have an entry like this on a macOS system: 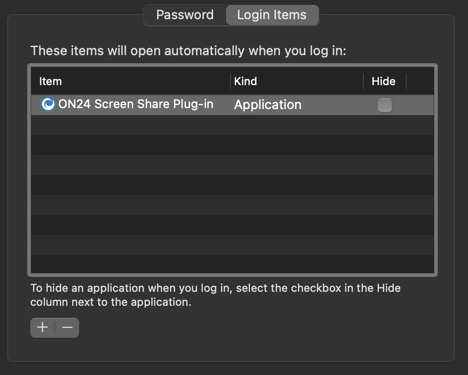 Once the plugin starts it launches a simple web server on port 5012. What is more important, via a series of requests, malicious users on the same network can fetch files from the computer running the plugin without any authorization.

Let’s take a deeper look at how this happens. We will discuss ON24 Screen Share plugin version 1. An attacker will have access to the HTTP server created by the Screen Share plugin on TCP port 5012 as long as he or she is on the same local area network. Here is a typical output of an nmap scan from a remote machine: 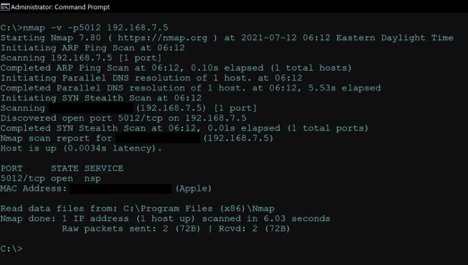 Next, the attacker must prepare another HTTP server that will handle configuration file requests originating from the Screen Share plugin. A very simplistic approach would be to use Python code to do that (refer to our POC on GitHub).

In red are actual files, in black are directories. Here is the contents of DTD and xml files:

ATTACKER_IP:PORT combination must be replaced with actual IP and PORT values of the attacker-provided HTTP server.

In the above directory structure, log and EventLogServlet are empty files.

The attack itself is triggered by a simple HTTP request like below (again, replace ATTACKER_IP:PORT with the attacker-provided HTTP server information first):

The above request will reach out to the built-in HTTP server of the Screen Share plugin, which in turn will try to collect its configuration from hostname value which will go to the attacker-controlled HTTP server. There, a simple XML External Entity vulnerability (XXE) will be exploited to send back the contents of files readable by the currently logged-on user. One caveat is that the path of the file to be read must be known beforehand.

If the HTTP server hosted by the attacker is not reachable, a message like that below will pop up on the victim’s macOS:

If the HTTP server is reachable, the exploit will work:

This proves that the file in question (/etc/ntp.conf) is read and its contents are sent via URL request to the attacker-controller server.