Hello again! After our previous post about the environment setup, now it is time to cover the main tool of this project, the WinDBG. WinDBG is a debugging tool, so will allow us to discover the secrets under the applications and kernel by working with assembly instructions and memory data. In 2017, Microsoft released the WinDBG Preview and increased the level of awesomeness with a beautiful interface (including dark mode!) and really cool features like TTD (Time-Travel Debugging). You can download the tool here, so let's get to it!

In this blog post, I'll write down some useful commands for starters and hopefully will demystify this tool a little bit.

For debugging an application on WinDBG, you can choose to attach to an existing process or you can run as a new process. 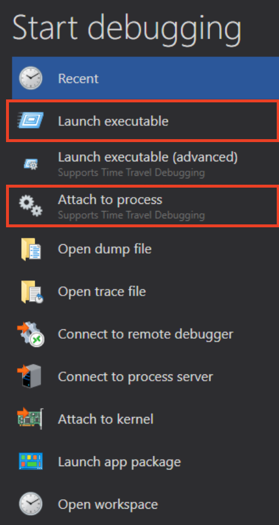 After choosing, we will have the process stopped waiting for a command to proceed. You will have a screen similar to this:

From here, we can proceed with the execution. You can use the Go sign on the menu or the command:

While you are debugging an application, you are adding a new thread to the process, the debugging thread. So when you stop (Break sign) the application you will be under this thread's stack as identified above. For debugging the application’s thread, you must change to the main thread and for dealing with threads we have another command.

For checking the stack frame:

I'm using the binary from the last H2HC CTF challenge for this post and we will probably re-use in the future, so feel free to download it.

Taking advantage of the information from this data, let's play around and unassemble data from address at line 0x8.

On the second command, I used the argument "l0x15" this indicates how many instruction lines I want to display, in this case 0x15 or 21.

For displaying the bytes as they are from a specific address, we should use another command:

In this case, the "l" will indicate how many groups of the specific bytes will be shown.

A breakpoint will indicate where the execution should be stopped for the analysis, so let's restart the application and breakpoint the entry function.

There are different types of breakpoint, with conditions etc. You should read the documentation and apply for your needs.

The breakpoint is hit and now we can walk on the execution.

There are a few options while stepping into the code, this is extremely useful as we can step to the next call, to the next return, to the next branching instruction and to a specific address and also a combination of these options.

At this point, if you want to "Step Into" this function h2hc+0x4530, you must use the command "t", otherwise, you will jump to the next instruction on the current branch.

While you are debugging and analyzing an application, sometimes you will need to modify a data to identify the application's behavior with no data input knowledge that will give you advance information about the application.

I set a breakpoint where there is a CMP instruction, we will able to modify data on memory and then analyse different execution paths took due to our modification.

In this case, it was not the value expected for jumping to h2hc+0x14f0.

So let's restart the application, set the breakpoint again and modify this data.

As we were able to modify the data, we took the jump (JE) and reached a different execution path on the execution.

If you need to modify the data from a register, you will need a different command:

After this blog post, I feel that we could go further and investigate some applications since now we know how to work (at least a bit) with WinDBG. For now, I hope you got the fundamentals of WinDBG and enough for doing some basic analysis on your own. This is really not a definitive guide, but hopefully enough to pique your curiosity about the tool.