Pingback: Backdoor At The End Of The ICMP Tunnel

In this post, we analyze a piece of malware that we encountered during a recent breach investigation. What caught our attention was how the malware achieved persistence, how it used ICMP tunneling for its backdoor communications, and how it operated with different modes to increase its chances of a successful attack. Malware using ICMP is not new but is relatively uncommon. Because of this, and the presence of certain strings, we decided to name this malware ‘Pingback’. Below we demonstrate how Pingback’s protocols work and also provide sample code on how we interacted with the malware.

We begin by looking at how Pingback achieves persistence through DLL hijacking.

The file we investigated was a DLL file called oci.dll. We knew that the file was suspicious during our initial triaging, but we could not figure how it was loaded into the system because the DLL was not loaded through traditional rundll32.exe. 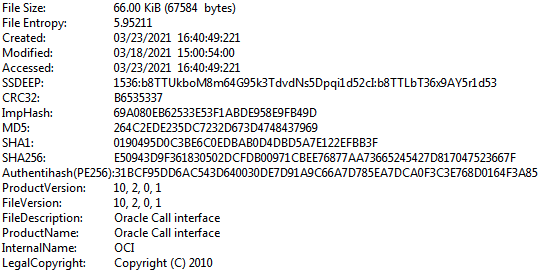 We found out later that it got loaded through a legitimate service called msdtc (a.k.a Microsoft Distributed Transaction Coordinator). This service, as the name suggests, coordinates transactions that span multiple machines, such as databases, message queues, and file systems.

It turns out the msdtc service indirectly loads oci.dll through MSDTCTM.DLL that loads an ODBC library to support Oracle databases called MTXOCI.DLL. This library searches for and tries to load three Oracle ODBC DLLs which include oci.dll, SqlLib80.dll, and xa80.dll. 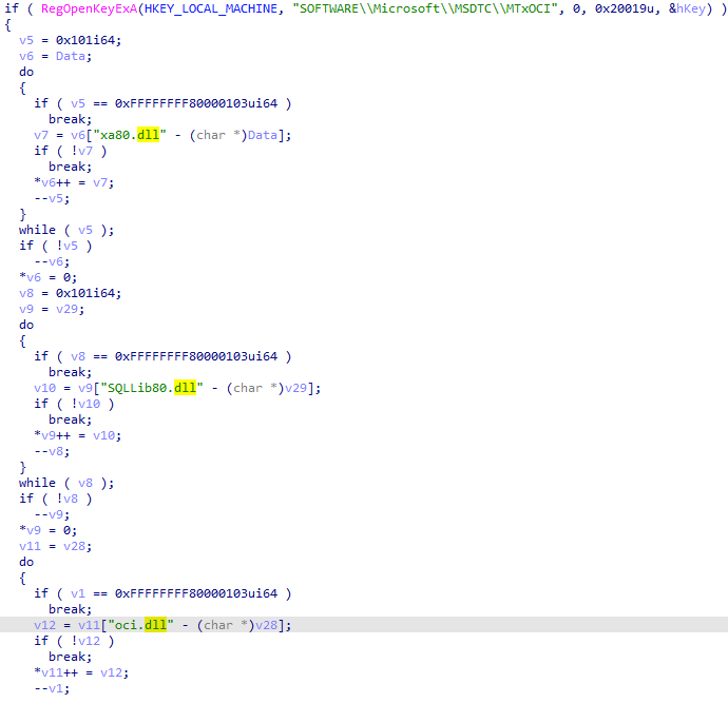 By default, the three Oracle DLLs do not exist in the Windows system directory. So, in theory, an attacker with system privileges can drop a malicious DLL and save it using one of the DLL filenames that MTxOCI loads. We have experimented with dropping all three DLL filenames but only oci.dll was successfully loaded by the service. 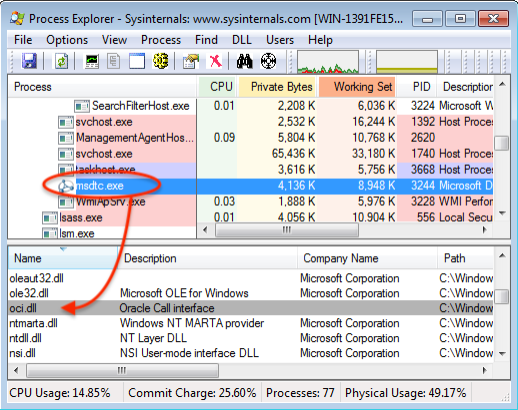 msdtc by default does not run during start-up. To remain persistent, the msdtc service needs to be configured to start automatically, so the attacker would need system privileges to reconfigure the msdtc startup type. It can be done manually using SC command, via malicious scripts, or through a malware installer.

Our theory is that a separate executable installed this malware. In fact, after a bit of hunting, we found a sample in VirusTotal with similar IOCs that installs oci.dll into the Windows System directory and then sets msdtc service to start automatically.

We also observed during our analysis that in a VMware environment, the VM Tools service also loads MTXOCI and eventually loads the malicious OCI.DLL. 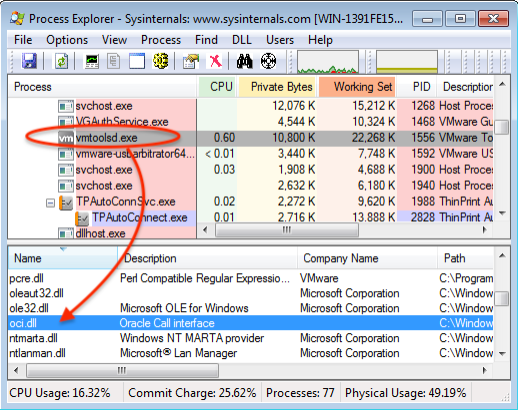 Figure 6: In Process Explorer, we found that OCI.DLL is also loaded by VMTools service in a VMware Environment

So that is the DLL loading part. But before turning our attention to Pingback itself and its operation, let us first lay out what is ICMP and how ICMP tunneling works.

The Internet Control Message Protocol (ICMP) is a network layer protocol mainly used by network devices for diagnostic and control purposes. It is used in utilities such as ping to determine reachability and roundtrip time, traceroute, and path MTU discovery to avoid packet fragmentation and enhance performance. It can also be misused by malicious actors to scan and map a target’s network environment. This is one of the reasons why there are some debates over whether ICMP should be disabled or not. In most cases, users do not pay attention to ICMP packets either as they do not manifest open ports on the machine.

The malware, Pingback, at the center of our investigation, oci.dll, uses the ICMP protocol for its main communication. This has the effect of being hidden from the user as ports cannot be listed by netstat. Below we detail how Pingback uses the ICMP protocol to pass data back and forth between the infected host and the attacker’s host. A technique called ICMP tunneling.

Figure 7: A diagram of an ICMP packet. ICMP data size varies, we assume that the IP maximum transmission unit is 1500 bytes. The packet size limit for an ICMP Data is maximum allowed size of an IPv4 network packet, minus the 20 byte IP header and 8 byte ICMP header.

An ICMP packet is built on top of the IP layer and has an 8 byte ICMP header. The packet size limit for ICMP data is a maximum allowed size of an IPv4 network packet, minus the 20 byte IP header and 8 byte ICMP header. Or approximately 64K. The ICMP data is determined by the message type. The message types are defined here: https://www.iana.org/assignments/icmp-parameters/icmp-parameters.xhtml

In the diagram below, A echo packet header defines the ICMP type, code, checksum, identifier and sequence number. And lastly, the ICMP data section is where an attacker can piggyback an arbitrary data to be sent to a remote host. The remote host replies in the same manner, by piggyback an answer into another ICMP packet and sending it back. Figure 8: ICMP packet. The size of the ICMP data sent by the attacker is always 788 bytes 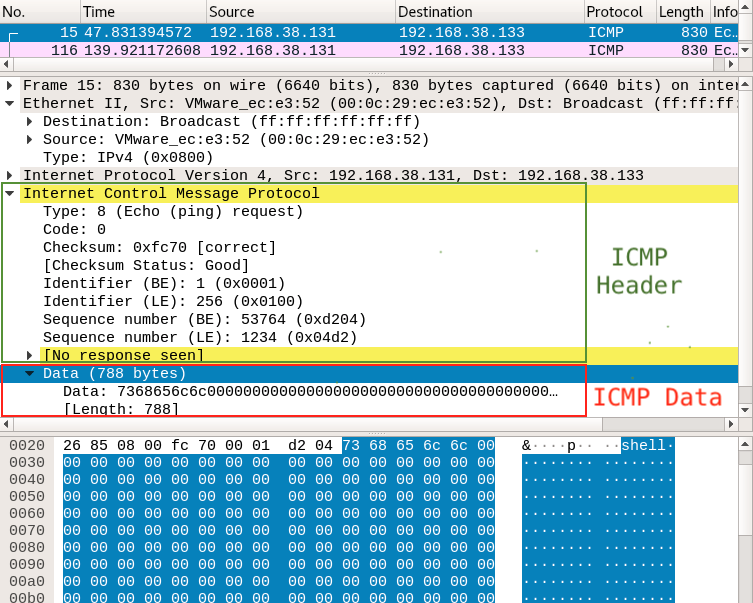 Now that we have laid out the foundation and how an attacker can piggyback data on the ICMP packets, we are ready to explain exactly how exactly this malware works.

Pingback specifically uses the echo (ping) request or type 8 ICMP message. It starts a sniffer for every  IP address on the host,  spawning a thread to sniff packets on each individual IP address. To distinguish between its own packets and other packets, the sniffer ignores anything else that’s not an ICMP echo packet and does not contain the ICMP sequence number 1234, 1235 or 1236. It also ignores packets not destined for the specified IP address.

It then interprets the data in the following format:

Figure 10: Malware's ICMP data is represented by this C structure. See appendix below for detailed information of the cmd and cmd_line fields.

The sequence is used as a message type for each ICMP data. It currently supports 3 message types:

This is interesting, you can see Pingback uses a combination of ICMP for initiating any of the commands and TCP for better performance and reliability. A pure ICMP mode is also provided but is not very reliable.

To download a file in mode 1, the attacker performs:

We have provided a source to demonstrate all three modes and most of the commands supported by Pingback.

We have also prepared a video to demonstrate how our client interacts with the malware running in an isolated infected system.

ICMP tunneling is not new, but this particular sample piqued our interest as a real-world example of malware using this technique to evade detection. ICMP is useful for diagnostics and performance of IP connections in the real world. It is very useful to have them enabled but must be balanced by real-world threats. While we are not suggesting that ICMP should be disabled,  we do suggest putting in place monitoring to help detect such covert communications over ICMP.

For network administrators and technical audience, a rule can be implemented to check if a packet is an ICMP echo (type 8), the data size is 788 bytes or greater and check for ICMP sequence number: 1234, 1235 or 1236.  Backdoor command strings such as “download”, “upload”, “exec”, “exep”, “rexec”,  “shell” that found in an ICMP data packet can also be flagged. Trustwave Managed IDS devices can also detect this malicious traffic.

Finally, this malware did not get into the network through ICMP but rather utilizes ICMP for its covert bot communications. The initial entry vector is still being investigated.

cmd – bot commands and may be any of the following:

condition:
all of them
}